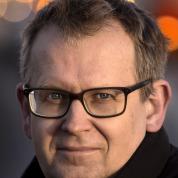 This article describes the role that media coverage plays in creating awareness of the psychosocial support available to people in Sweden who are affected by crises, accidents, and trauma. The connection between media coverage, psychosocial support and traffic accidents has not been made clear in the literature or previous research. Trauma and fatal injuries in road accidents in Sweden has decreased in recent decades. Developments in China and the European countries shows that many people are killed on the roads and the resulting trauma would be significant for relatives and families who are affected. Therefore, it is important that those affected can get the support needed and requested.  The importance of insurance and insurance companies in China has been desribed by Dellien (Dellien, 2011). In Sweden the municipal authorities operate POSOM-groups that provide psychological and social care in the event of major community crisis. However, knowledge and awareness of social support for trauma victims is also very important for insurance companies in Sweden. The economic and social costs of long-term consequences is very important to prevent in society. A Swedish study show that a system called “pay-as-you-speed” (PAYS) could save lives and create at safer road transport system (Stigson et al, 2014). This article describes how team leaders in the POSOM-groups experience accessibility, communication and interactions with the media. The article focuses on how to increase awareness of emergency crisis support for one of today's major public health problems - traffic accidents in the community.

The consequences of traffic accidents can create to significant social and economic burdens in China and Europe (Berg et al., 2005; Tierens et al., 2012). In light of the long-term social, psychological and economic consequences of crises, trauma, and accidents in the community, there are several good reasons to try to reduce the damage and costs for individuals, insurance company and society.

In Sweden nearly all the 290 municipalities have a POSOM-groups. The members include social workers, nurses, priests, deacons, police officers, rescue workers, and teachers.

The aim of the study was to analyze the team leaders’ experiences of meetings and interaction with the media before and after a crisis event. The study sought to discover what phenomena could be identified and the extent to which the leaders of the POSOM-groups participate in the media coverage and communicate the opportunities for receiving crisis support. The four specific research questions were: 1. To what extent are crisis leaders available in relation to the media? 2. To what extent do the social workers experience good media reporting? 3. How can the POSOM-group become better known to victims and the public? 4. What risks is it possible to identify when a POSOM-group become more accessible to the media? A questionnaire was sent out to the team leaders in POSOM-groups. A total of 223 of 290 POSOM-group leaders responded to the survey. The questionnaire consisted of 14 questions. The informants therefore had the opportunity to write about their experiences of providing crisis support work in the municipalities. The study followed the research ethical principles of the Swedish Research Council.

Previous research in the field of emergency crisis support and psychosocial care in crises, emergencies and disasters in the community have focused on real events, for many years (Arnberg et al., 2011; Arnberg et al., 2012). Studies of disasters and major accidents have been of great importance for the development of crisis support; studies were done, for example, of a hotel fire in Borås in 10 June 1978 (Lorin, 1979; Lundin and Jansson, 2007). From a Scandinavian perspective, acute crisis support improved greatly because of lessons learned in connection with several disasters (Kulling, 1994). Studies have been done on providing crisis aid in the context of natural disasters (Örtenwall et al., 2000; Kulling and Riddez, 2001; Nieminen Kristofferson, 2001; Nieminen Kristofferson, 2002; Broberg et al., 2005; Bergh Johannesson et al., 2009; Hanbert et al., 2011; Brake, 2012). 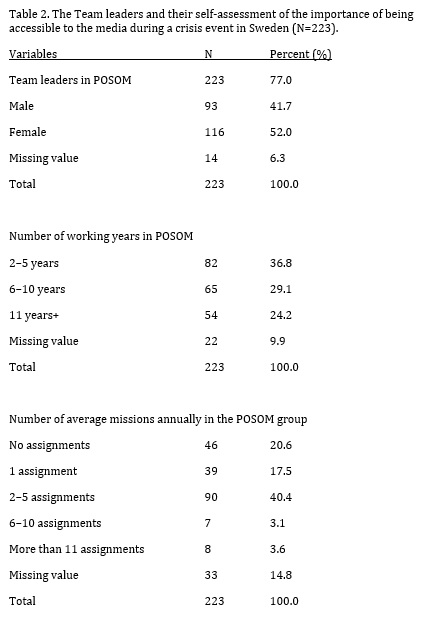 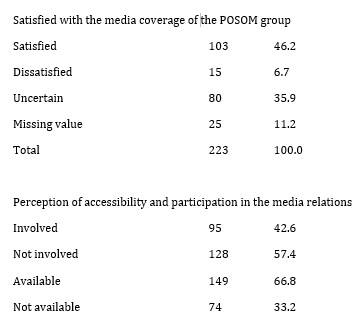 The team leaders of POSOM-groups said several factors were relevant to whether the relationship between a POSOM-group and the media is good. The respondents’ stories have been categorized into five main themes. The first theme can be described as the importance of harmonious relations between the media and the POSOM-group. It is important that both the crisis support workers and reporters have a good understanding of each other's professional roles, because the POSOM-group includes members with different professional backgrounds such as social work, health care, education, emergency services, policing, and churches. A second theme concerned the importance of balance and objectivity in the news coverage of a crisis event, of the psychosocial care and of the POSOM-group and its function and role. A team leaders said: “Balanced and objective media coverage increases people's knowledge of what has happened, what is being done, the understanding of the correctness of the efforts made. This reduces both fantasies and anxieties". The third prominent theme relates to the degree of positive and neutral media coverage of the crisis event. Several informants had told the reporters in a positive way how they could avoid conveying rumors and prevent rumors of a crisis event spreading. A fourth theme relates to the team leaders' experiences of media coverage of providing emergency psychosocial support. One informant said:

When a young man who was a member of the military lost their lives, the POSOM- group was in the church opened in the evenings. On the second day, the magazine had a story about crises, how to react, etc. The coverage described the importance of the POSOM-group and what POSOM did in this case.

When reporting an emergency incident or accident, it is important that the team leader knows what information may be disclosed. Finally, the fifth and final theme relates to the content of good dialogue between the POSOM-group and the media.

The respondents had both positive and negative experiences of the media reporting about psychosocial support. One informant said the following about their positive experiences: "My thoughts are that the media relations and media coverage is an accurate, informative, and factual account of the importance and content of POSOM-group services at various events. Little more is written than that we are active. In this way we also gain credibility with the public".

The POSOM-groups can be activated by several different kinds of trauma, crisis incidents, accidents and disasters in the community. A type of crisis events are relatively common are traffic accidents. Although several thousand people died in traffic accidents in Sweden during the last ten years in Sweden, POSOM-groups activated only in a minority of cases. Strangely, in some municipalities POSOM-groups that provide people with emergency crisis support for trauma in road accidents while other municipalities do not provide such emergency support through their POSOM-groups. This creates disparities between municipalities. Municipalities should be able to provide more acute crisis support in connection with this type of crisis. This study has shown that the team leaders of POSOM-groups have a limited practical experience in meeting the media during a crisis event. The study also shows that many team leaders believe that more education and practical media training is needed to bring important messages to the public. For future training of team leaders and members of a crisis team, it may be worthwhile to start by discussing different topics on the theme of risk. One simple proposed means of increasing risk awareness and mental preparedness for the duties of a team leader and a member of POSOM-groups is to provide a reminder consisting of the following 8 questions: a). What could happen? b). What is the worst that could happen? c). How likely is it? d). What would you do then? e). Can you prevent it from happening? f). Can it be made less serious? g). Can it be made less likely? h). Can you handle the situation if it does occur?